Update:  A second series entitled Scream for Liberty has been created in 2018.
The journey to digitally paint my first piece of original art titled “The Scream for Justice” has
been fascinating.  I generally use Adobe Illustrator for my illustrations; but the 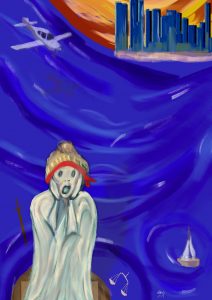 Photoshop mixer and blend brushes have opened my eyes to new possibilities.  In order to create my “Munch style” art inspired by “The Scream”,  I utilized Kyle T. Webster’s brushes for Adobe and Photoshop CC.  I used the Munch Filbert, Filbert Dry Mixer and Short Blend brushes primarily for this technique.  The piece interprets what could happen if the Roman goddess, Justitia (aka Lady Justice) were to remove her blindfold.

The Sketches for Scream for Justice

Originally this piece was to depict Lady Justice ruling over the heavens and earth with a crown full of swords made to look like thorns.  The thumbnail sketches show the simple balance that I was trying to create that was reminiscent of Edward Munch’s origina 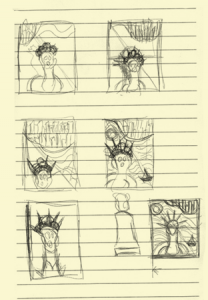 l painting.  Lady Justice is balanced by the city skyline, while the sun balanced the boat.
From a sketch drawn while watching the sun set in Nantucket, I envisioned Lady Justice recoiling in horror at the injustices of the world as she turned her back to look away.  This concept later evolved to one where Lady Justice slides her blindfold up creating a situation where justice is no longer blind.

In the end, the plane, city and boat represent the jurisprudence that Lady Justice reins over – air, land and sea.  As she screams at what she has witnessed, she has dropped her sword  symbolizing a loss of authority. Justitia has also dropped the scales which results in an imbalance in weighing evidence and a loss of reasoning.

As the goddess witnesses injustice, the blood and life is drained from her head to her toes. It makes her sickly green looking and almost turning her to stone. The skyline turns from green to blue as the city attempts to conspire with the sky and sea to overtake justice.  With it comes a fiery result that engulfs the city.

However the goddess turns away from the land, sea and air in an attempt to simulate the appearance of having a blindfold on.  Although her sword is rusty, it floats just below the surface.  And Lady Justice’s scales, bent and distorted, float on the surface indicating hope.