On March 3rd 2018, Iceland held the Grand Final of the Icelandic national selection, Söngvakeppnin 2018. The winner goes on to represent Iceland at the 63rd Eurovision Song Contest that takes place in Lisbon, Portugal. Broadcasted live from Reykjavik’s Laugardalshöll arena, six acts battled for the coveted position.

This year’s show also managed to book top international stars from Scandinavia to perform.opened the show with his 2017 hit “I Can’t Go On.” Robin represented Sweden in 2017 in Kiev. And the interval acts included Denmark’s Emmelie de Forest, the 2013 winner of Eurovision. She performed her new single “Sanctuary” as well as her winning entry “Only Teardrops.” And Svala, Iceland’s 2017 representative for Eurovision, who failed to qualify for the Grand Final, sang a slow haunting Icelandic rendition of her entry “Paper.” 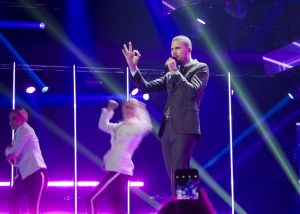 The competition had a little bit of something for every musical taste. The show featured everything from power ballads to R&B and even a bit of folk music. Most of the acts chose to sing in English, which is somewhat surprising.  The last time Iceland qualified for the finals at Eurovision with an English language song was 2014 when the Pollapönk scored with “No Prejudice.”

The show got off to a somewhat slow start with two rather bland entries. The show opened with the song “Battleline” by the male/female group Fókus. The five singers, dressed in bizarre coordinating red outfits, took turns singing uninteresting verses to the camera. Next was a duo that goes by the name Áttan. Their song, “Here for You” is a slow R&B funk jam. And while the song had a few nice vocal moments, this male/female duo lacked on stage chemistry. They looked as if they had just met in a bar and decided to do a karaoke duet.

Heimilistónar, a quartet of middle age mothers who play their own instruments was an audience favorite. Dressed in 1970s colorful mother of the bride floor length dresses, they performed “Kúst og fæjó” in Icelandic. Imagine them as the Partridge Family without David Cassidy. Each of the women manned guitar, keyboards and drums, while the lead singer sang lead vocals in front of two young campy backup male singers. The performance 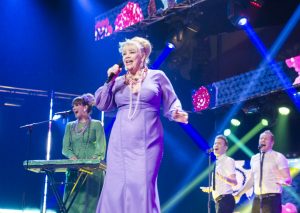 generated no excitement; nothing but an Icelandic sing along.

Aron Hannes, a striking young blond guy, sang “Gold Digger.” No it’s not the Kanye West hit but clearly inspired by it. The song was definitely a fan favorite of the female 16 year olds and younger in the audience. It also featured five energetic teenagers dressed in polo shirts, khakis with cardigans wrapped around their necks. They attempted to pull off boy band soul but failed miserably. The staging was messy, their choreography chaotic and it was impossible to decipher any sort of melody. 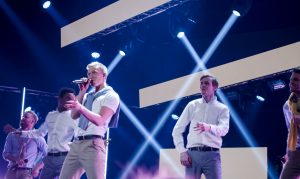 Battle of the Mic Stands

The competition finally got into gear when Ari Ólafsson sang “Our Choice.” And although the 19-year-old sang a rather sappy song, he sold the ballad with an honesty and purity that the crowd loved. His boyish charm, Nordic good looks, and dimples for miles melted hearts in the arena. Ari sang with an innocent vulnerability that was believable. He even had his bad boy moment when he threw down the mic stand in an attempt to assert his dominance over the audience. Yet his emotions probably got the better of him. After he finished the song and saw the audience’s enthusiastic reaction, the singer actually broke down in tears on stage as he suddenly realized the importance of the moment.

Closing the show was Dagur Sigurðsson with the only rock inspired tune of the evening. Dagur sang Í stormi (Saviors) in Icelandic. Dagur is more of the anti-rock hero: a “X Factor” alumnus with a body type far from svelte, pudgy baby face and no visible tattoos. He could be mistaken for a shy grocery store checkout bagger. 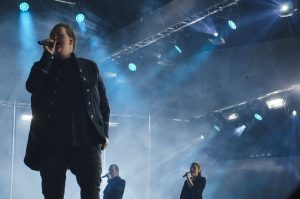 But from the moment he opened his mouth he transformed into rock god and immediately owned the audience. His power rock ballad received the only standing ovation of the evening. His sound is reminiscent of a Steve Perry of Journey: hitting the high notes without any strain or effort yet with an ability to manipulate his vocals during the soft moments. Not to be outdone by Ari, Dagur also threw down his mic stand. He also managed to adeptly raise a knowing eyebrow, which translated to the audience a message that said, “Don’t be fooled by my innocent looks.”

Dagur was the favorite going into the finals and the evening’s preliminary results confirmed his status. But the surprise of the evening was that after the Jury vote and the televote results were announced, Ari with “Our Choice” had finished second. Both artists, who 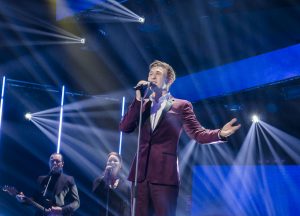 advanced to the evening’s run-off, sang their songs one more time before the final televote of the evening took place. And with a comeback from behind, Ari was announced the winner with a shock upset over Dagur.

Can Iceland Break the Curse?

Will Ari help Iceland qualify for the Eurovision final for the first time in three years? Ari will need to manage the nerves, find a strong audience connection and hit that high note. It’s a tall order and Ari is not a seasoned professional. So Iceland probably will not move past the semi finals at Eurovision.