Today’s memes tend to be captioned photos that are meant to be funny, often as a way to publicly ridicule human behavior. Other memes can be gifs and verbal expressions. Some memes can be more philosophical content. One of the funniest and fastest spreading memes catapulted a reality tv contestant to super stardom.  Who knew walking backwards in high heels covered in Dollar stores merchandise could lead to fame?

If you didn’t watch season 10 of Rupaul’s Drag Race, you missed one of the Internet’s fastest spreading memes and phrase. During the first elimination drag queen Miss Vanessa Vanjie Mateo lost the lip sync challenge to Kalorie Karbdashian.  During her exit, Miss Mateo with amazing grace left the stage by walking backwards saying Miss Vanjie, Miss Vanjie… Miss Vanjie.  And then the Internet broke.

Miss Vanjie became an overnight world-wide sensation.  In fact on my holiday in Portugal this year, I heard some drunk tourist screaming “Miss Vanjie, Miss Vanjie” near the castle in Lisbon. And from that stunning exit from Rupaul’s Drag Race came one meme after another.

“Da Vanjie” is my art meme.  This mixed media portrait is inspired by the Louis Vuitton Masters Collection of luxury hand bags featuring Da Vinci’s Mona Lisa. The portrait is an art tribute to breakout drag performer Vanessa Vanjie Mateo. And Mona Lisa’s (a.k.a Miss Vanjie) make-up is courtesy of Photoshop and I used a photo transfer method to print the image on linen fabric.  “Da Vanjie” is part of a group show at City Lights Gallery. 8 x 10 inches. 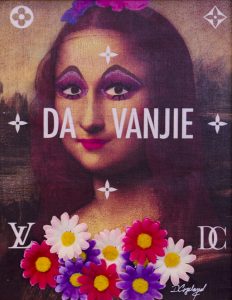