The Goal of Visual Merchandising

Design inspiration can come from anywhere. For example, I often get design inspiration from displays in store window fronts. The craft of visual merchandising is one of the truly overlooked arts. The main goal of visual merchandising is to attract, engage and motivate a customer towards making a purchase.  It is a silent but powerful selling technique that plays on the subconscious.

Since everyone is looking at their cell phone screens, distracted by listening to music on their phones, or purchasing online, visual merchandising plays an even more important role. No one understands that more than Saks Fifth Avenue’s Flagship store in New York City.

Most people are familiar with the Christmas Holiday window showcases that are designed to entertain. But Saks uses its valuable window real estate year round to entice customers into the stores with its visual displays. How do you know if the display is a winner? If you can’t see the window because its blocked by tourists taking pictures, its probably worth a pause in your travels.

On Wednesday January 11, 2017 Saks Fifth Avenue launched its Resort SS17 (Spring/Summer 2017) window displays. The concept examines the intersection of art and fashion. Raylin Diaz Suarez, Director of Windows for Saks, and team chose six works from artist Seth Van Kirk. Seth, as it turns out, is also the Director of Visual Merchandising for Diesel. 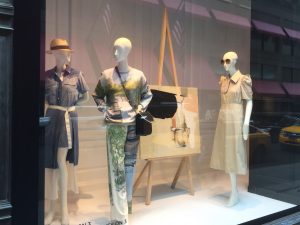 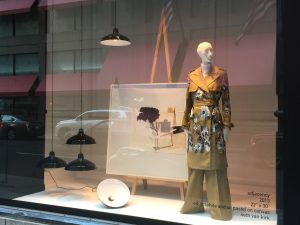 Seth describes his work as follows:  Nowadays, the social media phenomenon has created a heightened sense of individualism where one has become enslaved by edited self-expression in order to acquire recognition, acceptance and validation by others. The ego has grown powerful and the struggle to achieve enlightenment has become arduous.   This movement has magnified humanity’s insecurities and humanity has become dependent on social media for ephemeral security.  This has complicated the quest toward authenticity.

The work is an attempt to comprehend these universal issues by sincerely confronting and documenting my personal experiences.   The ongoing dialogue between the work and myself channel sentimentality and nostalgia while primarily targeting the affects of sexuality: companionship, vulnerability, censorship, privacy versus public, morality, ethicality, guilt and shame.

Many of the works on display employ graphite and mixed media techniques. You can see more of Seth’s work at sethvankirk.com