One of my all-time favorite desserts is the Grillswith. In its simplest form, a Grillswith consists of a lightly grilled glazed donuts topped with a scoop of vanilla ice cream. Now I have generally come across two types of reactions when I describe this to people. The first, “OMG” that sounds amazing. Or the opposite reaction which is why in the world would you fry a donut that has already been fried. You are just going to have to trust me on this. It is completely heavenly and simple to make.

The history of the Grillwith, at least for me, goes back to my college days at the University of Virginia, in Charlottesville, VA. The name apparently started off as “The Grills;” but it can come “with” other items. For locals and students it’s simply “Grillswith.” I later discovered that the Yankee Doodle in New Haven, Ct., also served a similar dish. The Doodle called their dish “Griddled Donuts.” The Yankee Doodle closed in 2008.

After a Saturday night of hitting one fraternity party after another, my friends and I would seek out one of the few places still open at 3am that served food. Nothing polished off an evening of drinking like a burger and dessert at the White Spot. The White Spot (still in operation today) is a classic greasy diner about 10 feet wide with counter stools only. Its the hot spot on the weekend for drunken co-eds with only a few dollars left in their pockets. I think you probably can picture the scene.

If you want to impress your guests with this simple recipe, just follow the directions below to wow their tastebuds. Just remember this dessert is not for wimps or Weight Watchers. I guarantee this will throw their points into double digit deficits.

The ingredients are simple: butter, glazed donuts and vanilla ice cream. Now you can add more to pretty this dish up but I am a purist. So I will give you the receipt basics and offer some alternatives at the end.

And while the ingredients are simple, your choice of ingredient brand is extremely important. First, you cannot use any donut. For example, no fresh glazed donuts from the local bakery or Dunkin Donuts. The best glazed donuts are the boxed ones from the supermarket. I would even go so far as to recommend the ones they clearance because the sell by date is near. Another good choice is the Krispy Kreme glazed donuts. Again stay clear of the ones made fresh at their stores. I can’t explain it but when you grill them, fresh ones just don’t cut it. 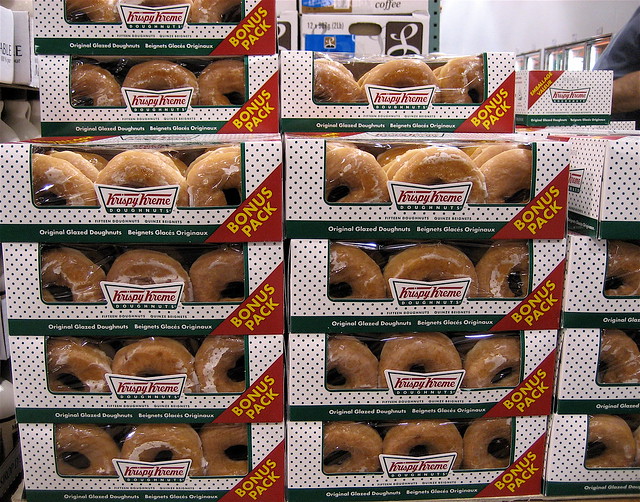 Next is the vanilla ice-cream. Splurge out on this. Remember since you are saving money on the supermarket donuts, you can spend some dough on the topping. I prefer Godiva’s White Chocolate ice-cream. Because It’s so creamy and rich, it will set the tone for the first bite. Another great choice is Hagen Daz’s Vanilla Bean.  Just remember you want a vanilla ice-cream that is rich with flavor.

Grab a sturdy thick saucepan or griddle plate. On the stove top toss a couple pats of butter in the saucepan or skillet set to medium high.

When the butter melts, toss a glazed donut in the puddle, and cook. You will only be leaving the glazed donut cooking for a few minutes. You do not want the donut to burn but rather allow the sugary glaze to caramelize into a gooey and crunchy coating.

After a few minutes flip the donut to the other side and allow it to cook to a color just this side of caramel. The grilling process transforms the interior of the donut. The donut effectively loses its light airy-ness in favor of of a dense, more chewy funnel cake.

Now add a scoop of your favorite vanilla ice cream to cover the donut hole and you are done.  If the ice cream is frozen solid in the carton, let the carton sit out for10 or 15 minutes before you grill, so your guest don’t have to dig too hard.  This dessert should just melt in their mouths.

Serve this dish warm to your guests. You could also top with whipped cream or a Tate’s chocolate chip cookie. And if you want to fancy up your dessert plate, use Hershey’s chocolate or strawberry syrup to add a touch of sophistication. Bon a petite!